2017 – events and activities in Gosport,

As part of One World Week’s “Good Neighbours” theme, we explored how choosing Fairtrade products – in this instance gold – enables us to be good global neighbours. You can support marginalised gold miners to improve their livelihoods and communities by choosing and encouraging others to choose Fairtrade Gold.

2 – 30 October at the Gosport Discovery Centre

Gold is a symbol of love, power and wealt 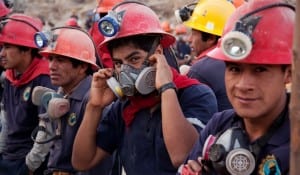 h the world-over. But look behind the glitz and the reality is not so glamorous. Up to 16 million men, women and children are pushed into small-scale gold mining by poverty around the world. Confronted by numerous obstacles to getting a fair price for their gold, the miners, including women and children, lead dangerous and precarious lives.

These Fairtrade gold miners at Sotrami Mine in Peru take safety seriously.

It brought to life the challenges facing small-scale gold miners and the difference Fairtrade can make.

Fairtrade GOLD – how to buy beautiful products without exploitation.

As part of One World Week’s ‘Good Neighbours’ Programme, GFA invited Alan Frampton, owner of CRED ( the Fairtrade gold jeweller in Chichester and London) to talk about his pioneering work with small-scale artisanal mining communities in Peru and Uganda. Their aim? A better life for the miners and Fairtrade accreditation for their gold. 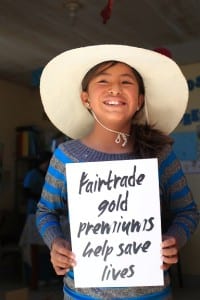 Some of the world’s poorest people. including children, are forced to seek a living by mining for gold in hazardous and often illegal conditions, using technologies which endanger their health and poison the water supply.

If you don’t want your wedding ring or that precious gift to cost miners their health, and sometimes their lives, and put environments in danger, Fairtrade offers an alternative of hope and life.

Alan has worked with the communities involved and gave a vivid and most informative talk recounting his experiences though a vividly illustrated presentation.  He emphasised the importance of Fairtrade, and particularly the Premium, which empowers miners to choose how they improve life in their communities.

We also offered Fairtrade fizz and light refreshments before the talk – all for £5 per head.

About 20 people attended and they were able to look at the exhibition too; they were very interested and asked lots of questions.

The GFA Quiz team, calling themselves “Fair Enough”, retained GFA’s title in a very close contest, winning by only half a point!  Congratulations to David, Mark, Norma, Sheila, Tessa and Tricia. ( the 2017 team included different personnel from our winning one last year!)  You can see our record in this event here.

GFA and Portsmouth Fairtrade Forum members had an information stall at the Sustainability Centre on behalf of Hampshire Fairtrade Network.

The display focused on how Fairtrade is helping producers adapt to the impacts of Climate Change, and the environmentally friendly production methods required for Fairtrade Certification.  Free handouts of Liberation Nuts, and Traidcraft biscuits demonstrated the quality of Fairtrade products.

We also drew attention to Global Justice Now’s campaign for farmers in the Africa and elsewhere in to be able to grow organically and sustainably using their own seeds from year to year instead of being forced to buy from Multinational Companies.

A display about the products featured and the producers involved remained in the Centre for 10 days.

at the Discovery Centre on 4 March

Nearly 1400 people came to the Discovery Centre on March 4th. Many of them joined us for a well deserved break and found out how to put FAIRTRADE into their break and so give all those hard working Fairtrade producers a break too. 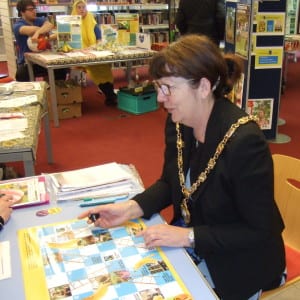 There was plenty to do and taste for all the family: 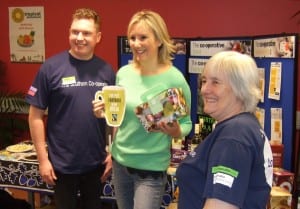 Gosport MP, Caroline Dinenage, puts Fairtrade into her break , at the Co-op stall at the Discovery Centre event 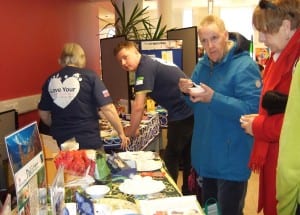 Many thanks, for the donation of Fairtrade products for prizes, to:

GFA could not have put on this event without the help of:

The Bookworm Cafe served Fairtrade coffee throughout the Fortnight. 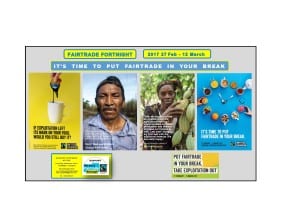 A display of posters about how Fairtrade combats exploitation was mounted and the public was invited to play Breaks and Ladders on a giant games board on the table by the display. It was there for the duration of the Fortnight.

Fairtrade Assemblies and Breaks in schools

GFA made a short PowerPoint about breaks, showing how children of non-Fairtrade producers work long hours in dangerous conditions. In contrast, children of Fairtrade farmers are not allowed to undertake dangerous work or long hours that prevent them attending school and enjoying some leisure – they benefit, too, from the Fairtrade premium, which is spent by their community on such things as improving schools and equipment and better health provision.

This has been updated for use at any time – it is in two parts  – take a look here: