2016 – Events and Activities in Gosport: 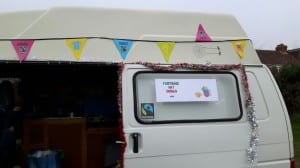 Mark and Sheila Smith of GFA served hot Fairtrade drinks to keep everyone warm in the queue to see Santa. 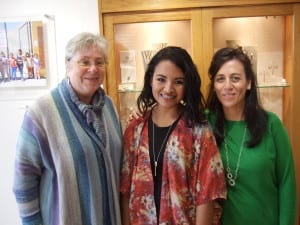 Sarah (GFA) with Dajhanna (centre) and Monica (right) at Cred

GFA’s Co-ordinator, Sarah Hirom, attended a reception to celebrate the 20th Birthday of pioneering jewellery brand Cred Jewellery in Chichester.  There she met Alan Frampton, the owner, who, with Greg Valerio, pioneered Fairtrade Gold, and Monica, who runs the shop.

She had a long chat with Dajhanna Zarate, who was visiting the UK as part of the celebration. She is the daughter of an artisanal smallscale gold miner from SOTRAMI mine. Her parents, like so many others during the 1980’s economic crisis in Peru, relocated to the Atacama Desert in desperate search of work. Conditions were very tough for families in the Santa Filomena community, which is why her parents invested everything they have in educating their children in the hope of giving them better future. She told Sarah about the difference Fairtrade had made to her community. She was sent away from home at the age of 8 as local mercury pollution was affecting her blood and the local school had no running water and good teachers wouldn’t work in such conditions.

Now, thanks to the Fairtrade premium, they have a brick-built school building with clean water, good teachers and up-to-date equipment including computers. Medical facilities have improved and they have just raised enough money through an auction of Fairtrade gold jewellery to buy an ultra-sound scanner for the local maternity unit. Dajhanna now works with a Peruvian charity promoting social development amongst poor communities including the small scale mining communites.

GFA members Mark and Sheila Smith found that as it was a cold day they spoke to quite a lot of people while selling them Fairtrade tea and coffee, and Traidcraft Fairbreak bars 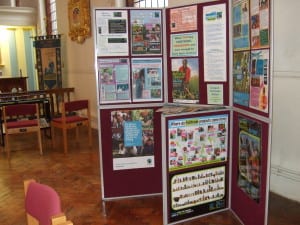 Holy Trinity is working towards becoming a Fairtrade Church, so Tessa and David Bloodworth, who have a regular Traidcraft Stall there, arranged for a display about Fairtrade to be the Church during the open days, 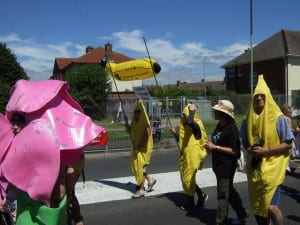 A team of 4 members, 3 in Banana suits, one in a hat laden with Fairtrade forest products carried the banana banner in the Parade handing out hundreds of leaflets along the route; they also carried a small green velvet monkey to reinforce the “Fantastic Forests” theme.

A Garden Party to celebrate Fair Trade was hosted by Linda and Steve Grant in their lovely garden. David and Tessa sold lots of Traidcraft products. It was a lovely warm sunny morning and it was acclaimed as  ”A very happy event”. 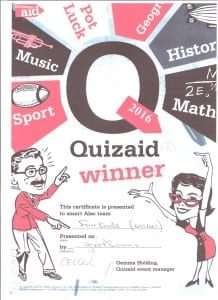 The quiz is held each year to raise funds for the work of Christian Aid.

CONGRATULATIONS! to the Gosport Fairtrade Action Team, “The Fair Traders” who won the quiz.  Well done: Jane, Mark, Tara, John, Norma, Tricia and Charles! (We last won it in 2012 with an almost completely different team – only Charles was in both.  In the last 3 years we have come second.)

“Around the World with Fairtrade”

A big all day family fun event in the Gosport Discovery Centre.

This was the largest public event GFA has ever organised.  It attracted a great deal of attention:

By 4.30 the library had clocked 1450 visitors on Saturday, about 450 more than usual (though of course it varies).

The Bookworm Cafe, using Fairtrade Coffee (Cafe Direct) and Fairtrade Sugar sachets, for the first time (in addition to their normal use of Fairtrade tea, fruit juice, hot chocolate, and cocoa and sugar in their cakes) reported that they had been much busier than usual.

The Mayor, Keith Farr, opened the event, saying:     “Gosport is proud of the volunteers who have firmly established Fairtrade in the town… more supermarkets and shops are now selling Fairtrade products and fifteen restaurants and cafes are using Fairtrade ingredients in their food.” 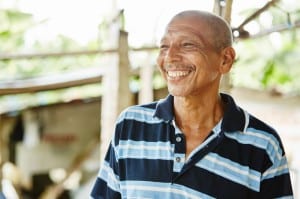 Julio Mercado Cantillo, banana farmer from Colombia -Click on Julio to see a short film about how Fairtrade has helped his family’s farm.

About 60 people heard Julio’s presentation. He described his work as a banana farmer  and said :

“Before Fairtrade, the earnings from the farm were not enough to support my family and we often thought of selling the farm to bigger producers. With the Fairtrade Premium, food security and the quality of life in general have improved for my wife, children, grandchildren and siblings.”

The children’s corner was packed out with children listening to the story of  “the Fairtrade Fairy” (written and told by Tara Fisher).

Lots of people took part in quizzes, searched for Treasure in Peru and South Africa, played games such as Spanish Scrabble, Match the Flag, Wordsearches, Corporate Monopoly, a Fairtrade crossword, Choose a Fairtrade Breakfast, Match the Product to the Country, and children designed Fairtrade mugs, and coloured in pictures about growing cocoa, bananas and bee keeping and more. Lots of prizes donated by The Co-op and other local shops, cafes and pubs, were won.

We had magnificent support from Loud and Proud and a group of students from St Vincent College all of whom did everything that was asked of them with great grace, good humour and empathy for the wide range of visitors from children to the elderly. 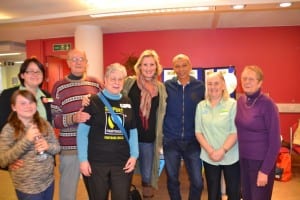 Some of the organisers, from GFA and the Southern Co-op with Julio and MP Caroline Dinenage ( photo: Graham Hewitt)

The Southern Co-op, who were part of the planning group, contributed free bananas, Colombian, of course, (could have been grown by Julio!) and brought a display of all the Fairtrade products they stock at the Palmyra Road Co-op. People were amazed at the variety of Fairtrade products available locally and enjoyed samples of chocolate, and blueberries (grown in Chile). They contributed all of this to the raffle and other prizes as well as providing 3 beautiful hampers.

The Help Palestine trade group attracted much interest in their Fairtrade olive oil and beautiful olive wood and colourful ceramic craft goods, all fairly traded, and sold £200 worth while having some good conversations. 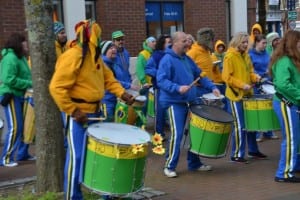 People found out what their local Councillors views on Fairtrade

Gosport’s MP, Caroline Dinenage, toured the event, meeting Julio, the banana farmer, chatting to the volunteers and tasting some of the products on offer, including the bread dipped in olive oil and za’atar (sesame and herb mixture),a Palestinian speciality. She visited the many stalls which illustrated examples of countries where Fairtrade benefits the producers; and those in the Gosport section which illustrated what it means to be a Fairtrade Borough. She said: 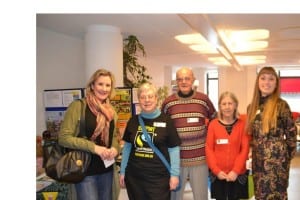 “I think we can all support Fairtrade’s aims to ensure that farmers get a fair deal while promoting equality of opportunity for female farmers, helping to ensure good education and health for their children and encouraging sustainable farming practices without the use of dangerous chemicals.”

Tricia Stevenson, one of the Gosport Fairtrade Action organisers, summed up the day: “We can be sure that a great many people in Gosport now know a whole lot more about the range of Fairtrade products available locally and how choosing them helps poor farmers around the world feed their families and build more secure lives. And everyone obviously had a lot of fun finding out!”
y
y
y

Fairtrade Fortnight in the Town Hall 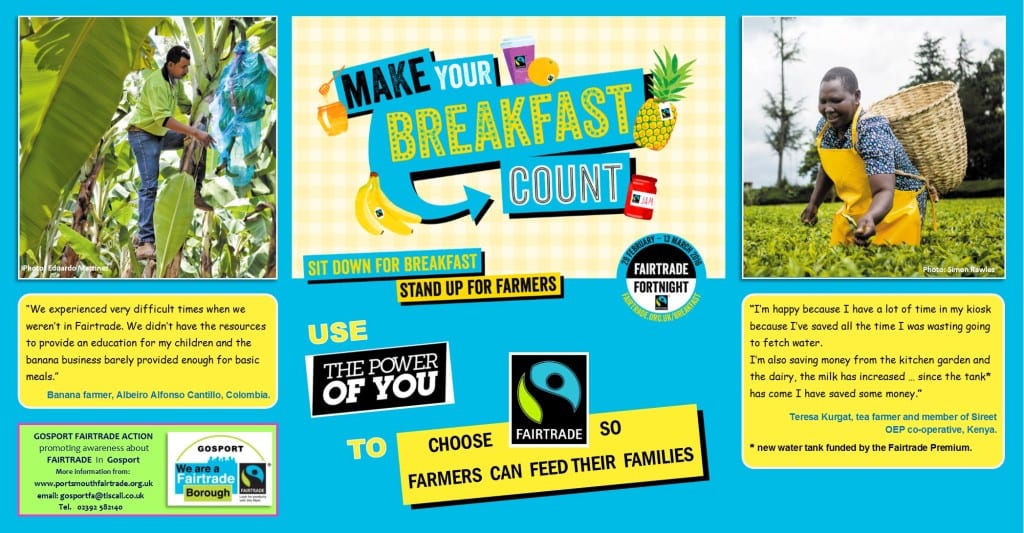 This banner was displayed in the Reception Area throughout Fairtrade Fortnight. In front was a table with images of breakfast foods on cards; people were invited to select 5 items then turn them over to find out if they were Fairtrade and where they could buy them. (Click on the image to enlarge it)