2015 – Events and Activities in Gosport: 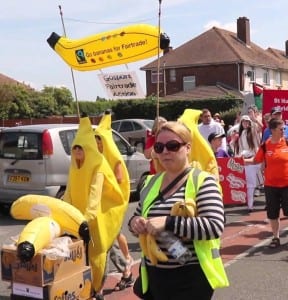 GFA members went bananas in the Bridgemary Carnival  procession on Saturday.  Dressed as bananas they paraded the “Biggest banana in the World”. They gave out thirty two kilos of Fairtrade bananas, donated by the Southern Co-op, to spectators along the route

We were supposed to represent a children’s story.  We chose “Beautiful Bananas” about a little girl in Kenya who sets off to visit her grandfather carrying some beautiful bananas; she keeps meeting animals who take her bananas but give her other fruit in return.

But it could equally well have represented the story: “The biggest Banana in the World” ! 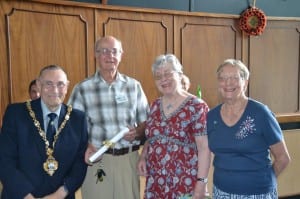 The Certificate of renewed Fairtrade Borough Status was presented to the Gosport Mayor (left) at the Council Meeting on 15 July by members of GFA’s Steering Group: (from right: Tessa Bloodworth, Chair; Sarah Hirom, Co-ordinator, and David Bloodworth, Minutes secretary).  Sarah Hirom, congratulated the Council for their continuing support for Fairtrade and being part of a network of 1,102 Fairtrade Towns around the world that was working to set fairer standards for trade; she said:

“We all know deep in our hearts that the cheapest deal is not always the best deal.  When we consumers buy cheap goods someone somewhere bears the costs – as in the banana industry where the price we pay does not cover the cost of production.  Farmers pay with their health, poor nutrition and being unable to take care of their children’s education; or the environment.  Fairtrade guarantees that farmers receive a price that covers their costs, so they can provide for their families farm sustainably and adapt to climate change; an extra payment enables them to invest in their businesses and their communities.”

GFA, who entered a team of 4 people, (most teams have 6!)  came second for the third year running. Well done Mary Heaps, Charles Hirom, Mark Smith and Tricia Stevenson. (More on our record here)

A team from Gosport Fairtrade Action took a stall on behalf of Hampshire Fairtrade Network. 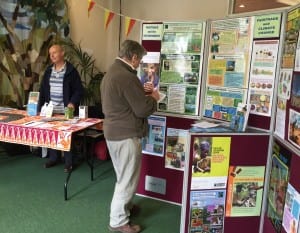 We had a display about Fairtrade and the environment showing how Fairtrade helps producers farm their land sustainably, protecting the environment and helps farmers adapt to climate change as well as the economic benefits Fairtrade brings to producers and their communities

A well informed and ecologically conscious audience was particularly intrigued by the Fairtrade palm oil cleaning products from Ghana.  They have learnt to avoid products containing palm oil because of the damage the vast plantations do to the tropical rainforest.  So Fairtrade palm oil was a surprise and attracted lots of interest. 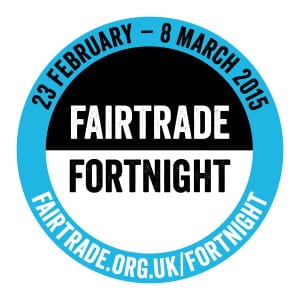 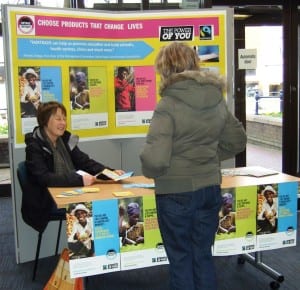 The Base Point Gosport Business Centre held a Fairtrade Coffee Morning at which the same film was shown and GFA provided information about using Fairtrade products in the work place.

The Mayor hosted a lunch time ‘drop in’ session for Town Hall Staff and Councillors, when GFA served Fairtrade snacks along side the Town Hall’s Fairtrade tea and coffee; we showed a short film, “Fairtrade Matters”,  in which tea producers in Malawi talked about how Fairtrade has changed their lives of enabling them to install clean drinking water in their villages which has improved the health of their children; build schools, a health clinic and buy an ambulance as well as set up a scheme to provide subsidised food when prices are high.

A new Leaflet for Gosport

In February 2015 GFA published a new leaflet, “Fairtrade in Gosport: where to buy and why it’s worthwhile”.  This includes information about Fairtrade including messages from Fairtrade producers; ideas for getting your school, place of work, business and place of worship more involved with Fairtrade and information about retail outlets, cafes and B&Bs that offer Fairtrade products, based on our recent survey (see below).  A big thank you to the Southern Co-operative who sponsored this leaflet.